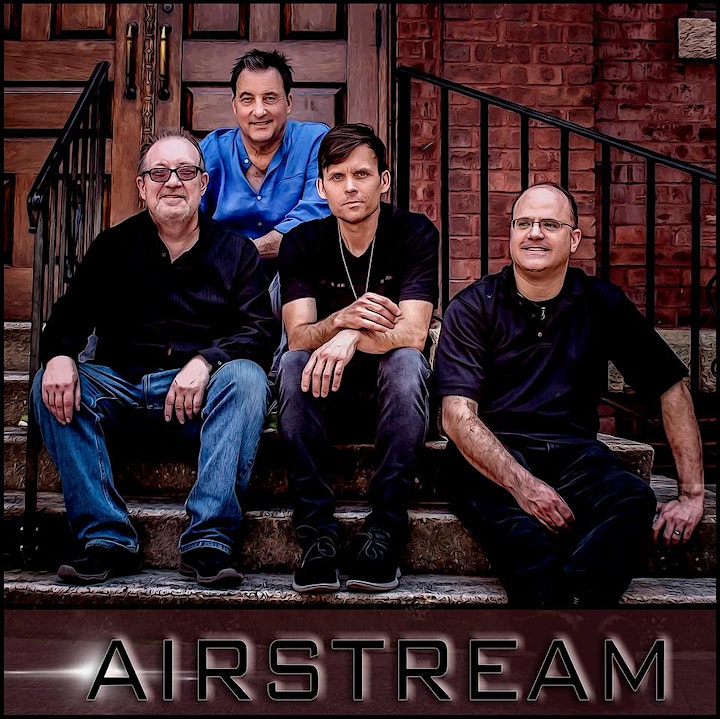 AIRSTREAM has been a Charlotte based Modern Jazz Quartet for the past 15 years. This collective effort features Andre Ferreri on Guitar, Mark Stallings at piano and synthesizer, Al Sergel on drums and Dave Vergato playing acoustic and electric bass. AIRSTREAM has been the vehicle allowing them to introduce new music and hone-in on their original compositions. Performing fusion, modern jazz and smooth jazz. Over the years they have all been busy with other projects and groups but often come together for special performances.

Mark Stallings is without a doubt the most sought after pianists in the southeast today. His list of performances and recordings are too long to name. A child prodigy and a graduate of NC School of the Arts. Mark has collaborated with many artists as a pianist , writer, producer and engineer. He is a full-time working musician.

David Vergato is a musician and professional educator with experience teaching band, orchestra, jazz ensemble, guitar, and general music classes. Originally from the suburbs of Pittsburgh, PA, he studied Studio Music and Jazz Performance on both the Double Bass and Electric Bass at the highly acclaimed University of Miami Frost School of Music and received a Bachelor of Music in May of 2000. Dave moved to Charlotte in late 2001 and began to play professionally throughout the area, where he met Airstream guitarist and mastermind Andre Ferreri, keyboard genius Mark Stallings, and master drummer Al Sergel. Dave later earned a Graduate Certificate in Teaching from UNC Charlotte in 2010, and a Master of Music Education from Winthrop University in 2015. He is presently the Director of Bands and Guitar at Bradford Prep School in Charlotte and the Adjunct Professor of Bass at Winthrop University, and resides in Harrisburg, NC with his wife and two children.

When he’s not teaching, he is stays busy performing with several groups throughout the Charlotte region and beyond. He has extensive performance experience and plays a wide variety of styles on both the electric and upright basses. Some of the groups he has performed with include the Charlotte Symphony (Pops), Union Symphony Orchestra, the Carolina Voices, the annual satire Charlotte Squawks, Denver & The Mile High Orchestra, Debby Boone, Natalie Merchant, Little Anthony & the Imperials, Ben Vereen, The Platters, Bowzer (from Sha Na Na), The Smothers Brothers, Five By Design, Ira Sullivan, Steve Lippia, Leonard Jones, Bill Hanna, Noel Freidline, Chad Lawson, Gabe Dixon, and many others. He has also worked as a pit orchestra musician at various theaters, on cruise ships, and at night clubs. In addition to Airstream, Dave has been involved in numerous original music projects in the Charlotte region over the years including Greg Lilley & Co., the Amy Broome Band, Ellie Morgan, Jessica Borgnis, Ricky Hitchcock (a.k.a. Vortex), Retro-Active, Mark Stallings Trio, Full Grown Band, and Punk Jazz Project. Dave plays regularly in the Charlotte region and at Hickory Grove Baptist Church, Eddie V’s Prime Seafood, and with the Tosco Music Party house band.

Andre Ferreri Originally from New York, Andre Ferreri is a self-taught guitarist who began playing at the age of nine. He started playing Jazz, R&B, and Top 40 music during his High School years, he then continued his studies in music composition and arranging at Berklee College of Music in Boston. His musical style was greatly influenced by many of the rock and roll legends of the time as well as jazz greats Joe Pass, Hank Garland, Wes Montgomery, Pat Martino and George Benson. Andre’s signature style combines the sound and energy of rock with improvisational jazz.

After school, Andre garnered the recognition necessary to be called to perform and be hired as a session guitar player. His compositions have appeared on national television shows, movies, and commercials for both radio and TV.

Andre’s credits include a long list of famous artists’ albums. He has played with many group combos through the years including Brook Benton, Maurice Williams, General Johnson, Chuck Berry, Jim Brock, The Poor Souls, Fred Story, Maria Howell, Herbie Mann, Dave Valentin, Bill Evans, Adam Nitti, Bucky Pizzarelli, Sam Moore, Brian Hyland, Danny and the Juniors, Lou Christy, Dennis Yost and the Classics Four, The Chiffons, The Shirelles, Little Anthony and the Imperials, The Coasters, The Marvelettes, The Platters, Deana Martin, Jenifer Holliday, Roger Williams and many others. He has also worked as a guitar clinician at several events with Larry Coryell, Chuck Levell and T Lavitz. He currently plays original contemporary jazz music with Airstream who have enjoyed 12 years of performing and recording. Andre is also a first-call guitar player for the Charlotte Symphony. In 2008, Andre co-founded Laser Records, a music label created to help musicians promote their music.